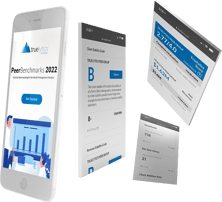 HI there! My name is Mike Langford. I will be working with the Truelytics team as a guest blogger and a bit of a futurist for the industry over the next three months. I will be sharing my perspective on where we are headed, what it means, and how you and your firm should prepare.

Instead of giving you the standard bio stuff, which you can find here, I thought it you might appreciate a more conversational introduction.

What qualifies me to be a futurist for the industry?

Have you ever read something that just sticks with you? I mean it gets burned into the fabric of your consciousness and shapes the way you think? That happened to me very early in my career when I read “The Road Ahead” by Bill Gates. In the book he wrote:

I graduated college as a member of the last generation of American workers who would enter their adult lives during the pre-internet age. It is hilarious to think back on the fact that my parents sent me off to college in 1990 with an electric typewriter and by 1996 every desktop at Pioneer Investments (my first job out of college) would have email and some were getting web browsers. No one at the time understood the value of employees having web access but by the time I left for State Street Corporation in 1997 everyone was online.

Early in my State Street career I was a vocal advocate for the company, a giant custodial bank and institutional money manager, to take the web seriously. At 26 years old I was having one-on-one meetings with the company’s CFO to share my thoughts on the matter.

When I joined Fidelity Investments in 2000 the race to go digital was on in the industry. My first mission at the company was to focus on channel migration. We had to actively encourage clients to choose the web over calling us on the phone and going to the branch for routine things. With the cost of each phone call ranging between $14 and $20 at the time, the value of serving clients online was easy for everyone to see. Not only would Fidelity save money but clients could take greater control of their investments and do so at a reduced price.

I knew how labor intensive phone operations were, and how routine the requests were from callers, first hand because during college I worked for BFDS answering phone calls for mutual funds clients. Our top requests were “Send me a prospectus” and “Tell me the closing price for xyz fund.” That was 1994 and 1995.

Soon after, I joined the team that brought Active Trader Pro to the world. With online trading taking off it was clear that active traders were a very profitable niche and they wanted more powerful tools.

And toward the tail end of my of my Fidelity years something else became clear. Social media was going to change the world. I joined LinkedIn in January of 2004. I was user 176,299 of a service that has grown to over 500 million professionals worldwide. I immediately saw the value and was sold on the promise of the next wave for our industry.

When I left Fidelity to start my own RIA I dove right in using LinkedIn to identify people who changed jobs (money in motion) and leveraging email newsletters and even podcasts. This was 2006 and I was really early on a lot of these things so the results were mixed but I could see I was onto something. Then..I discovered Twitter in 2007.

I’ll admit it, I really enjoy geeking out on new tech and being around innovators. So, when I was at a conference on podcasting and blogging in the fall of 2007 and one of the speakers say “get on Twitter” I jump on it. Then, I did nothing with it for months.

In early 2008 I saw how Twitter affected search rankings (SEO) and drove traffic for one of my clients and I was hooked. And a few months later I founded Tweetworks. The first tool that offered fully threaded conversations and groups for Twitter. I ran the company until the end of 2010 when, sadly, we ran out of money.

Sure, failure stinks but during the short time I ran Tweetworks I met many of the business leaders who have transformed our world as we know it. Many of them are still friends today.

The doors were open for me to a whole new network and access to those pushing the razor’s edge of innovation. After I shut down Tweetworks I moved to Austin and joined Socialware (acquired by Proofpoint) as the head of social strategy. We made it possible for financial advisors, agents, and wholesalers to use social media and remain compliant. My job was to evangelize the power of social media for financial professionals and teach them how it could be used to win new clients, increase share of wallet, and improve client retention.

When I left Socialware I founded finservMarketing and have been spending my time working on strategy for the financial services and FinTech industries ever since. One of my favorite things I get to do as a result is host SoFin @ SXSW each year in March. The event is a half-day, mini conference that kicks off SXSW for the financial folks who fly into town for the big show.

These Stories on Truelytics